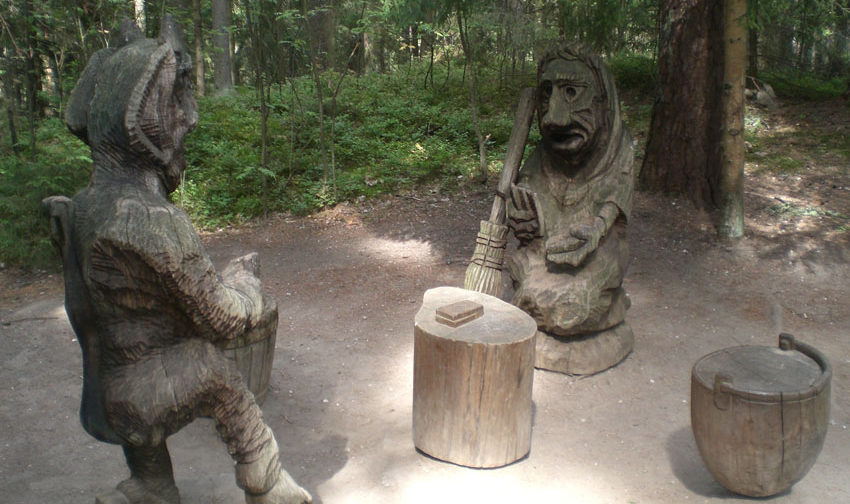 If the thought of woodland magic, sorcerers and wizardry quicken your pulse and put a mischievous twinkle in your eye, you could do worse than pop over to the Hill of Witches on day four of your Baltic Run. Just off the main street in Juodkrante in Lithuania, the public forest trail teems with a vast array of fairy-tale creatures, devils, crow-monsters, and saxophonists, taking you through the woods on a journey through the most well-known stories and legends in Lithuanian folk history.

What is it exactly? 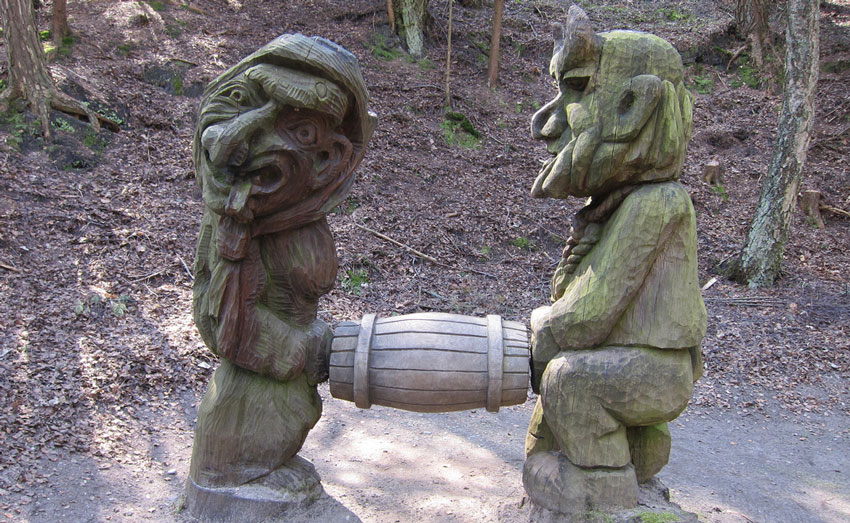 The Hill of Witches (or Raganų Kalnas in Lithuanian ) is an outdoor sculpture gallery. It is found on a forested sand dune about half a kilometer west of the Curonian Lagoon, along the Lithuanian Seaside Cycle Route. It was started in 1979, and has since been expanded several times; the gallery now contains about eighty wooden sculptures along a web of trails.

Sounds kinda similar to the Devil’s Museum in Kaunas. 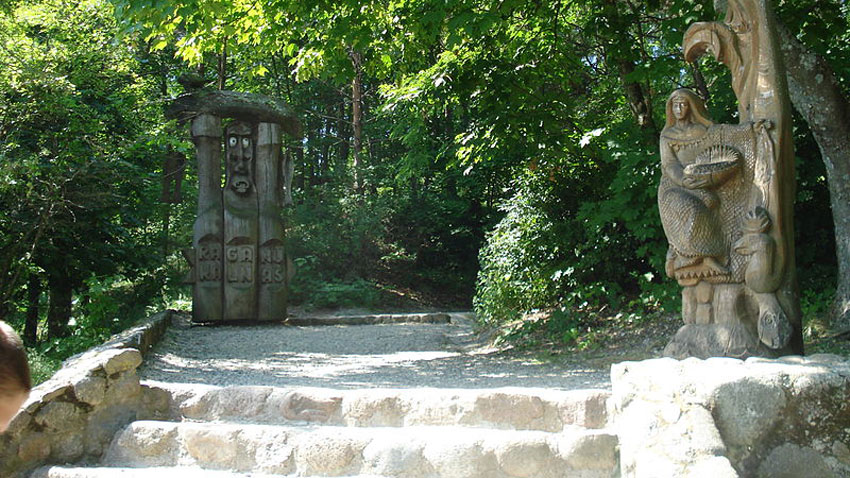 It’s sort of like a younger sibling to it, indeed. The sculptors drew on the two ancient traditions of woodcarving in Samogitia, and of Midsummer Night’s Eve celebrations on the hill. The figures depict characters from pagan traditions and Lithuanian folklore.
Woodcarving symposia are held at the park on a fairly regular basis, and new works are continuously added.

Are all sculptures folk tradition-themed? 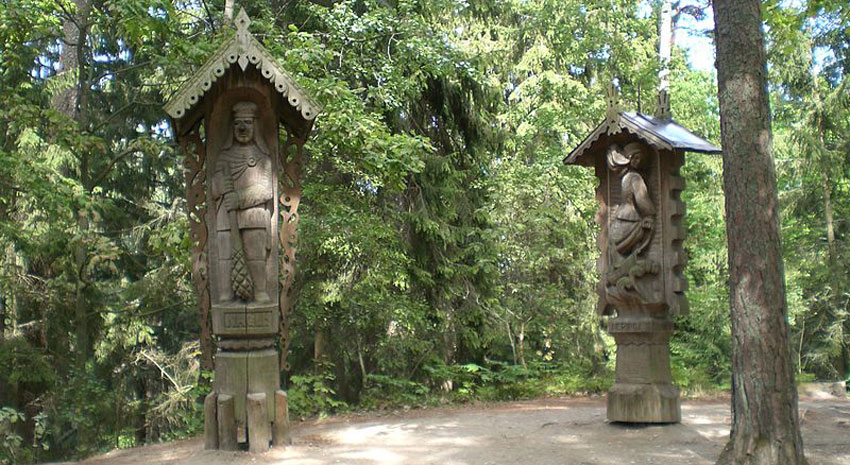 They are. The painstakingly hand-crafted sculptures each depict a popular character from pagan and folk traditions. The public park got its name long before the sculptures were dotted along the wooded trails; it is actually a reference to the pagan celebrations that take place on the hill during the Midsummer’s Eve Festival. 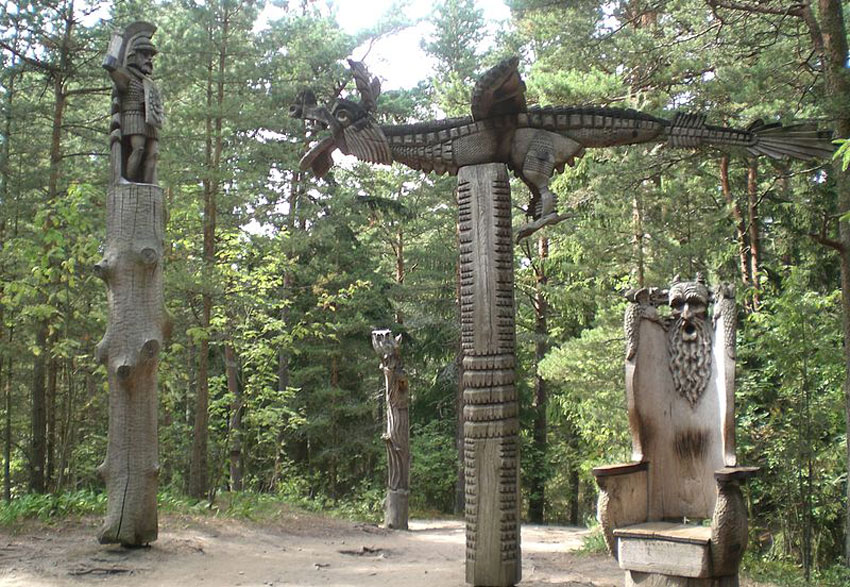 Every year on June 24th, people from all over Lithuania dance, sing and greet the midsummer with the older folk traditions of the country here. When Christianity became established in Lithuania, the celebration was rebranded Saint Jonas’ Festival, but of course many of the practices still have pagan roots, as you can plainly see in the fantastic world of the Hill of Witches sculptures.

How many sculptures are there? 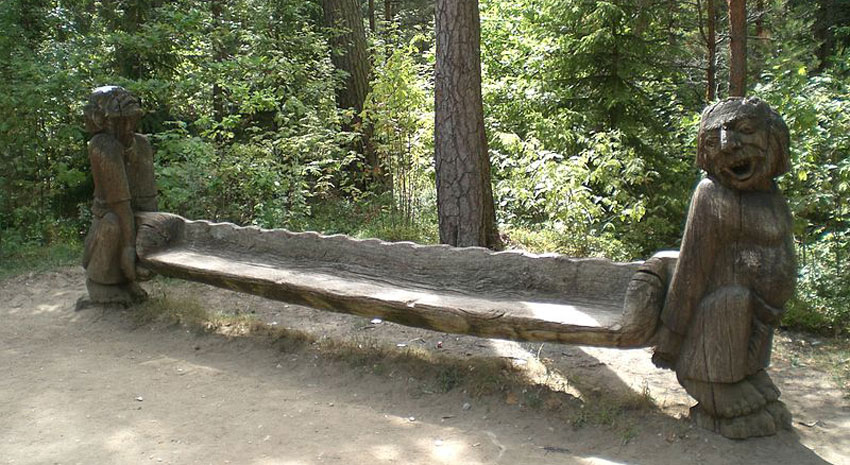 Seventy-one all together. They were mostly carved out of oak trees during the summers between 1979 and ‘81 by Lithuanian (mostly Lowland) folk artists. The hill sculptures embody spirits from the world of witches, demons, and characters of Neringa legends. 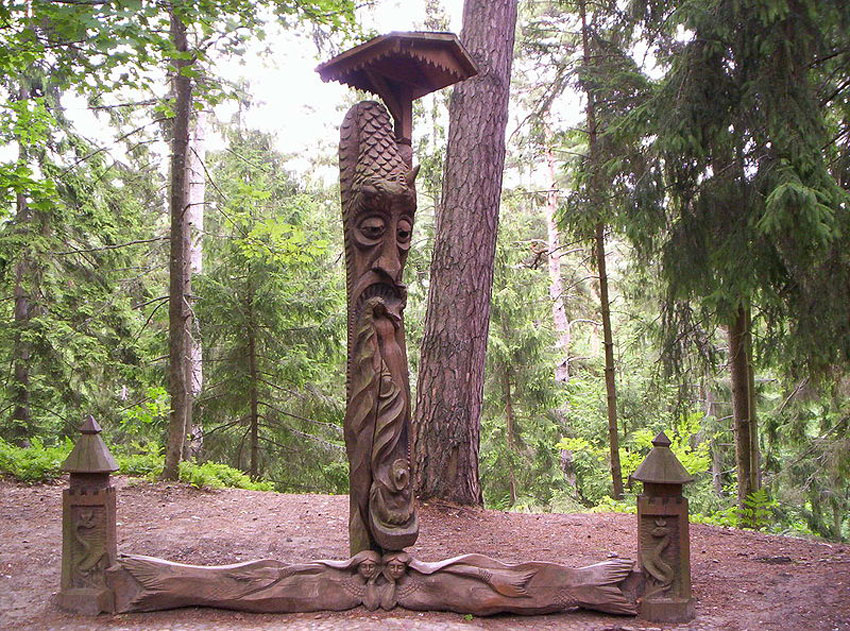 Quite! In the summer of 1988, the sculptors also added an ensemble of twelve pieces of magic-land furniture: swings, small hills, and chairs, presumably because comfort is important even if you are a woodland spirit.

Can’t argue with that.

Then, in the period of 1999 to 2002, during the “The Hill of Witches” symposium, new spirit-sculptures were added to the exposition, and the old ones were given a facelift wherever necessary. You can get acquainted with them for free, and take a touch of magic away with you on the next stretch of your Baltic Run.

Liked this story? Are you getting that itch to travel and go on an adventure? Then join us on the next Baltic Run. Find a team of like-minded crazies and we’ll see you at the starting line. If you want to join us in the virtual world then drop us a like on Facebook> or follow us on Twitter and Instagram> to keep up with our latest antics.
Tags:
baltic Baltic adventure Baltic countries baltic folk traditions Baltic rally Baltic Run Baltic States Baltic traditions baltics folk traditions in the baltics hill of witches lithuania legend Lithuania midsummers day in lithuania open air sculptures open air wooden sculptures pagan sculptures pagan traditions in the baltics the baltics winter rally