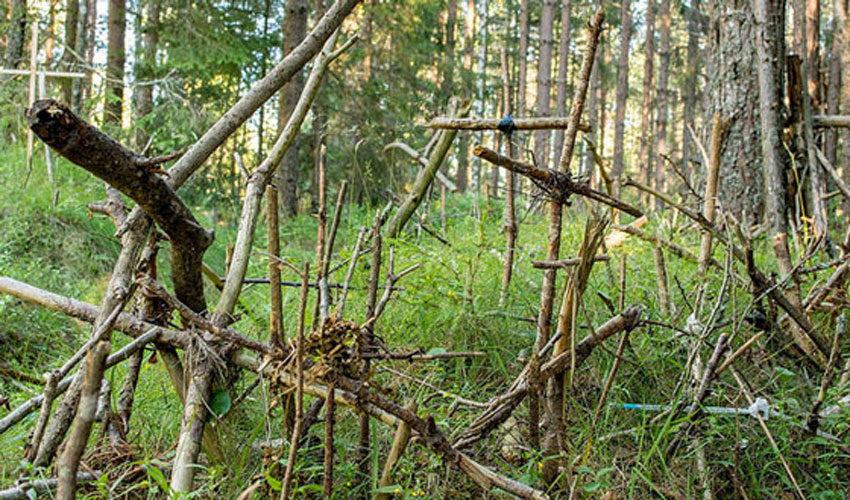 Though this hill – or  mound? –  of crosses in Hiiumaa island is nowhere near as extensive or imposing  as the similar hill in Lithuania, its more personal natural makes it all the more haunting.

How did it come to exist?

Found on top of a small Estonian hill,  this garden of crosses has hundreds and hundreds of small, simple hand-tied crosses scattered around a woodland. According to one legend, the crosses began appearing on the hill to commemorate a group of Swedish farmers who lives on the island of Hiiumaa, who were forced to relocate on the orders of Catherine the Great to Ukraine on the false promise of a better life in the late 1700s.

Okay, but why the crosses?

This is the mound (only in flat Estonia could it be called a hill) beside the main road, 7km west of Kärdla, where the last thousand Swedes who lived on Hiiumaa performed their final act of worship before leaving the island in 1781. Ever since then it has been a tradition for new visitors to Hiiumaa to brave the mosquitoes in summer and the cold in winter to lay a homemade cross here. Although this is not the only version of the cross history…

According to another tale, a pair of rival wedding parties chose this trail on the same fateful day, and inevitably ended up bumping into each other here. Of course, neither would budge and make way for the other, and a fight broke out. One side lost their groom, and the other lost their bride, so what could the remaining singles do but marry each other. This then gave rise to the legend that planting a cross on the site will not only bring good luck, but also help inspire a lasting partnership.

Hmmm. I think I’ll go with the first story!

I does seem a little less far-fetched, I grant you. Whatever the truth may be, visitors to the hill are invited to add their own crosses. There is only one rule: the crosses should be made out of natural materials one can find nearby without harming the environment. So people normally tie together two small tree branches with bark or hay and leave the cross to lie around in the forest.

So then they decay over a season and get replaced by new ones?

Exactly. Though these crosses may not last for too long, there is no need to fear that the hill will run out of them precisely because of what you said: the next visitors will just add their own crosses to this forever ebbing-and-growing mass of memorial twigs and sticks.

Sounds a very cool thing to do. Whereabouts is it again?

The Hill of Crosses is some 6 km from Kärdla, the main administrative centre of the island. It is well marked and easy to find from the road, so would make a nice addition to the Baltic Run, should you decide to come along next time.

Liked this story? Are you getting that itch to travel and go on an adventure? Then join us on the next Baltic Run. Find a team of like-minded crazies and we’ll see you at the starting line. If you want to join us in the virtual world then drop us a like on Facebook> or follow us on Twitter and Instagram> to keep up with our latest antics.
Tags:
Baltic adventure Baltic rally Baltic Run Baltic States Baltic traditions Catherine the Great Estonia hidden gems in estonia Hiiumaa hill of crosses legend the baltics ukraine