When you take the Baltic Run we guess you like cars, exploring behind the old Iron Curtain and a bit of an adventure. Did you choose this destination because of the beautiful Masurian lakes or a good Baltic Spa? But do you know how much your shiny modern car should feel humbled to drive around in the cradle of Socialist motor sport?

You probably have the idea that during the Cold War in the Eastern bloc cars were obsolete and crude, and generally speaking it is true. Moreover, there were a lot fewer of them, getting one for an ordinary citizen being a complicated and long process. Therefore you might assume that Eastern bloc countries couldn’t have a culture of motor racing, and that is where you are wrong.

Where there are cars, there are people who get thrilled by petrol, speed and competition. Why would it have been any different in the Soviet Union? The curious interlocking of civilian enthusiasts, the state-owned automotive industry and the even the military would look strange to one who hasn’t lived in that era. Even so, hundreds of passionate amateur enthusiasts spent their scarce money and little free time to live their dream. The few professional factory drivers were celebrated like football stars or astronauts. Motorsport in Socialist countries was thriving!

What might be even more surprising is what a great part the small Baltic Soviet states played in the development of motor sports in the Socialist half of the world. It’s true, in the Baltic rally and formula racing was huge!

Early Racetracks in the Soviet Union

After the Second World War the increasing traffic made it unfeasible for drivers to race around in public roads, like they used to do in the thirties. The first purpose-built racing track was constructed in the Baltic in 1958, too. The Neva ring went around Leningrad’s (St Petersburg’s) Kirov stadium. Similar racetracks were opened all over the country.

Still, it was only a closed circuit in a park. The interest of the public and the requirements of safety soon warranted well planned, safe and entertaining circuits. The Bikernieki motorsport complex was designed to host both car and motorcycling events, opened in 1966. It is located –where else – in the Baltic, outside Riga, Latvia. It still operates today. In 1974 another racetrack, the Neman Ring opened near Kaunas, Lithuania. The Parnu race course in Estonia began operating in the eighties.

There were similar circuits in Minsk, Belarus, in Kiev, Ukraine and in Georgia, but strangely enough none in Russia itself. Eventually, when the Soviet Union dissolved, the huge Russian Federation was left without a single purpose-built race track. Now, of course, they have the Formula One track in Sochi. 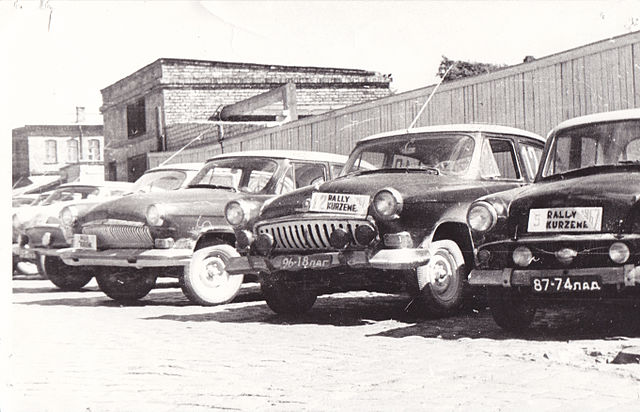 But is it a coincidence how densely these motorsport facilities were located in the Baltic? Not at all. Of course there is the sense of Baltic adventure these small but brave nations are known for. But more importantly, these inventive and diligent Baltic people were very good at what it took to be successful under the semi-amateur, bizarrely regulated Socialist racing environment.

The Socialist automobile industry bothered little with development. Most types were made after licensed old Western models. They were produced for decades without a thorough makeover. The production could never meet the demand, people had to wait years after (!) paying to receive their car. Factories could not afford to waste resources on developing racing cars from models that were obsolete to begin with. But this would not stop the fanatics!

It just made them more resourceful. With car loving engineers, garage masters and mechanics there was always enough enthusiasm to keep the cars rolling. Since nobody had fortunes to spend on development races were a lot more even and exciting. A simple gadget, the right settings, a DIY spare part could create the few horsepowers to make a difference. And it was the Baltic states where most of these ingenious developers came from.

An amateur motorcycle racer from the Estonian SSR, Ants Seiler was captivated by the „500s” category in 1957, and in the Tallinn Car Repair Factory no 1 he started designing and building his own models. By 1958 he drove his own make, „Estonia-1” in Leningrad’s Neva ring, unfortunately crashing it after setting numerous records and leading the race. Next year he already scored his first victory with the new models Estonia-2 and Estonia-3.

His models were so successful that the Central Committee of the DOSAAF commissioned 36 cars from him, planning to create a new category where these models could race each other. A new plant was set up outside the No 1. Tarzi where he worked to complete the order. To illustrate the bizarre circumstances these geniuses had to face, the factory management considered this task an annoying burden, while DOSAAF was a paramilitary volunteer auxiliary force, which was authorized to oversee technical sports.

The Estonia-3 prototypes stood in the workshops for months because they were not supplied with engines. But the amateur racers, engineers – and to their credit, the DOSAAF officials – wouldn’t give up. They completed the cars in their free time, and traveled the racing circuit at their own expense. Mind you, in the Soviet Union traveling was not only a matter of money, but there were racing enthusiasts everywhere, even in authorities issuing travel permits.

In 1965 it all fell into place as Seiler was appointed the head designing engineer of the plant. They created Estonia-9, which became the most produced racing car in the Eastern bloc, winning competitions domestically and internationally. In 1968 Ants Seiler died at the wheel of a 9M on the Bikernieki track. The company continued his legacy, and with their later models they continued to gather glory, carrying the name of the small Baltic state in the deadly Soviet embrace. Production continued all the way to the nineties.

Stasys Brundza was a Lithuanian driver for AZLK, racing Moskvitches. Unlike Ants Seiler with Estonia, when motorsports specialized, he chose rally instead of closed circuit formula racing. He was a highly successful racer domestically, and produced great results internationally – with a car of limited competitiveness. By the seventies the Moskvitch was becoming rapidly obsolete, which motivated him to change for the relatively modern new Lada.

Lada was an identical copy of the FIAT 125, produced under license. At first Brundza used an enhancement kit from the Italian tuning company Abarth. They had done it for the FIAT 125, it only made sense. There were no further development from the Italians, however, since they worked with new models – Soviets were stuck with Lada. Brundza therefore decided to set up his own tuning plant. For that he moved back to Vilnius.

With the help of the Ministry of Highways and Transport of the Lithuanian SSR he got a new facility where he could set up his planning and testing crew. Urban legend has it that it was located within a secret submarine development plant – it was not. It worked as a subsidiary of the state car repair plant Vilnius Avtoremzavoda. It can be said Brundza had it much easier than Ants Seiler of Estonia, e.g. the management of his mother company was enthusiastic and delighted to have them. It must be remembered, however, that Brundza had been a successful driver, and this happened over a decade later. Perhaps just Lithuanians didn’t want to be outdone by the Baltic neighbors?

The Lada VFTS is Born 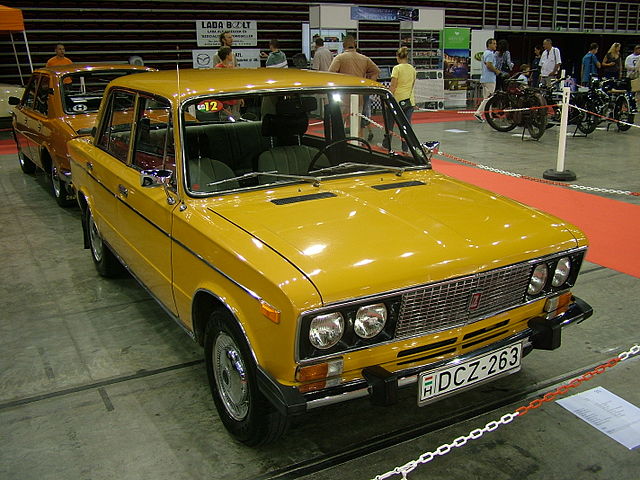 They started developing the VAZ-2101. If you grew up in any of the Socialist countries, it is the „round Lada”. In the 1976 Acropolis rallye Brundza scored a sixth place in the absolute category, outdoing Lancias, Renaults and Audis. The following model, Lada 1600R had titanium reinforcement, aluminium covers, and treasured imported „Western” parts in 1977.  The success increased the export to the Capitalist countries, too, so Brundza received all the support the industry could provide.

In 1978 the experimental workshop formed their own company, the ’Vilnius Fabrik Tuning Sport’, where they could develop their own models now. The workshop soon grew to 1500 sqm and over 50 in crew, with secure state funding and state of the art technology. The „Vilnius Lada” soon became the object of desire for any rally driver form the Soviet Union or other Socialist countries.

The introduction of the VAZ-2105 (if you grew up in any of the Socialist countries, it is the „square Lada”) meant they had to develop the new model, too. The new model was homoligized in the company’s name in 1982 – Lada VFTS became official! The Baltic crew experimented with turbo, too – if you have ever driven a Lada you must understand how incredible a Lada with 240 HP is! To show the expertise of the Lithuanian engineers, the sports department of the Lada factory had the same trials – they produced 150 horses.

VFTS owned the eighties in rally in socialist countries. They were imitated and reproduced in several countries – with more (Czechslovakia) or less (Hungary) success. Unfortunately by the end of the decade the base model was hopelessly outdated, and it lost all its international competitiveness. It kept doing well in the closed Socialist markets until the nineties, though. The final death blow to the little plant came with the dissolution of the Soviet Union. Stanys Brundza stopped developing sports cars in 1991, but didn’t give up his love for automobiles. The greatest figure of Baltic rally runs a car dealership now, and has the biggest vintage car collection in the country.

So there you have it! When you complete the Baltic Run, you aren’t pioneering this wonderful area in the name of Four Wheels. You are following the tire tracks of great predecessors, giants of Baltic rally and motor sports. It should only enhance your Baltic adventure, shouldn’t it?

Liked this story? Are you getting that itch to travel and go on an adventure? Then join us on the next Baltic Run. Find a team of like-minded crazies and we’ll see you at the starting line. If you want to join us in the virtual world then drop us a like on Facebook or follow us on Twitter to keep up with our latest antics.
Tags:
Ants Seiler Baltic adventure Baltic rally Baltic Run Bikernieki DOSAAF Estonia Estonia-1 Estonia-9 Lada VFTS Latvia Lithuania rally history Soviet motor sport Stasis Brundza Stasys Brundza Vilnius Fabrik Tuning Sort