The Legend of Jūratė and Kastytis 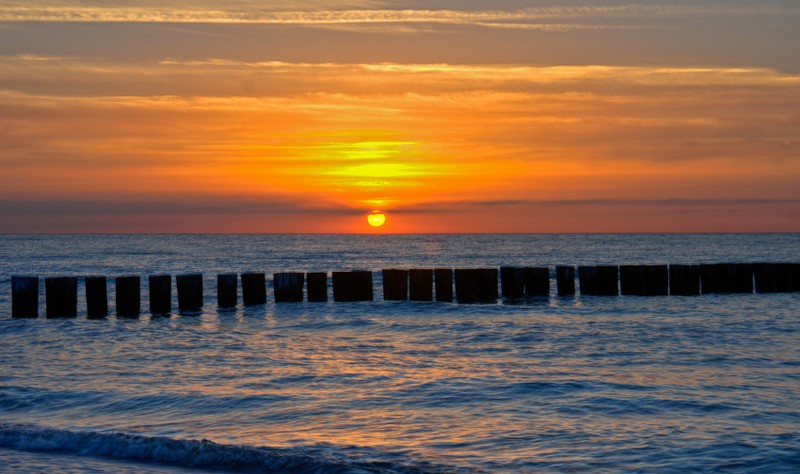 Jūratė and Kastytis is a traditional legend from Lithuania which has its roots in the Baltic mythology, but is written for the first time in the romantic narrative of the XIX century. It is a story of fearless love and godly power that tries to explain the origins of natural elements from the Baltic Sea, and, like most the love stories, it does not contain a “happily ever after” type of ending…

Jūratė was the goddess of the sea (actually, “Jūra” means literally “the sea”), who lived under the waves of the Baltic Sea in a beautiful castle made of amber. She was the queen of the sea, and so she ruled over all the maritime creatures and maintained the peace and balance between them. One day, a young fisherman named Kastytis was fishing near to her castle. He was a very talented fisherman. That day he was catching in his nets a big amount of fish. This made Jūratė angry, as she thought he was disturbing the calmness of the ocean by taking too many animals at a time. She decided to punish the fisherman in order to restore the peace of her kingdom, but when she faced Kastytis, they fell hopelessly in love with each other. 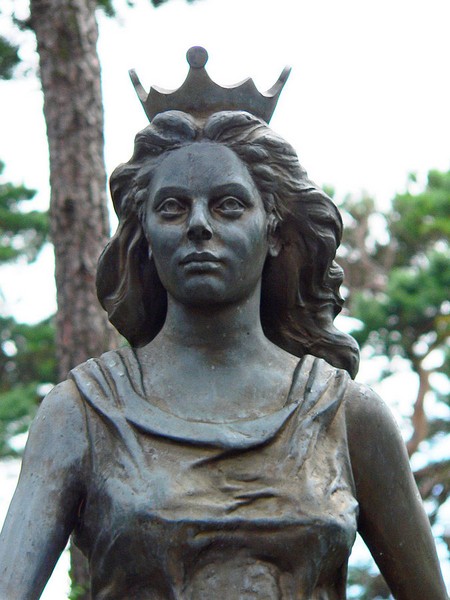 Statue of Jūratė in Jurata, Poland. Photo by Przemysław Jahr

They lived happily together in Jūratė’s amber castle for some time, but their happiness was not to last. Perkūnas, the god of thunder, the most powerful and feared of the Baltic gods, was the father of the sea queen, and he ended up discovering the affair between Jūratė and Kastytis. He got furious with Jūratė, not only for daring to love a mere human, which was not allowed for the gods as they were superior creatures, but also because she had been promised to marry the god of water, known as Patrimpas. Out of his rage, Perkūnas used his lightning bolts to kill Kastytis and struck the undersea amber palace reducing it to its ruins. As to Jūratė’s destiny, she was tied to the ruins of the castle to spend her life there to the eternity.

The legend says that until today, Jūratė still mourns in her underwater prison for the loss of Kastytis. It also says that this is the reason why little pieces of amber keep arriving to the shores and beaches of the Baltic Sea: they are what remain of Jūratė’s undersea palace after the struck of the God of Thunder. Those which shape looks like small amber tear are said to be the most precious, as they are the tears of Jūratė that arrive from her imprisonment to the shore during the stormy days that shake the ocean. 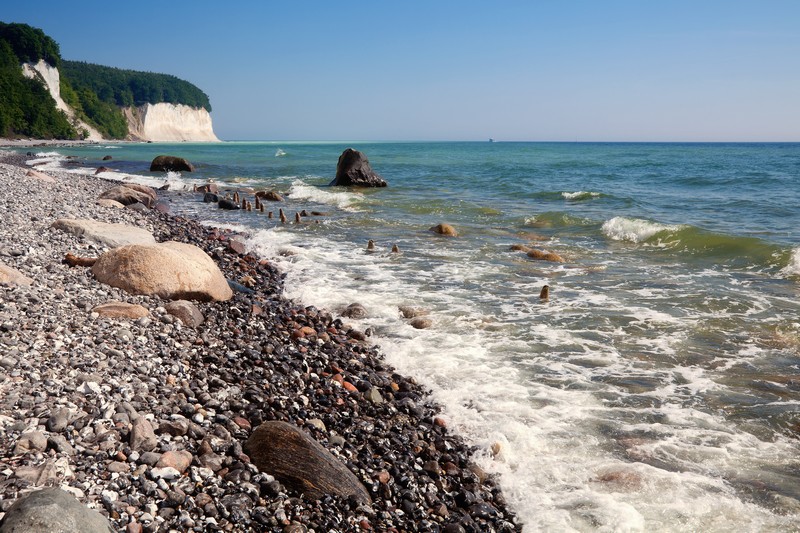 Jūratė and Kastytis is one of the most popular and famous legends from the Lithuanian tradition. Its origin is not precisely defined as it came from the popular oral tales, but it was first recorded in 1842 by the writer Liudvikas Adomas Jucevičius. It is possible that the story contains different elements from the original legend, as it was influenced by the romantic writing style that was at its peak at the time that Jucevičius wrote the story.

Since then, it has been adapted several times into poems, ballet, and even a rock opera, and it has inspired many different artistic creations. Some examples are the ballad poem written in 1920 by the famous Lithuanian poet Maironis, or the woodcut illustrations made by the artist Vaclovas Rataiskis-Ratas, which won awards at the International Expo of Paris in 1937. 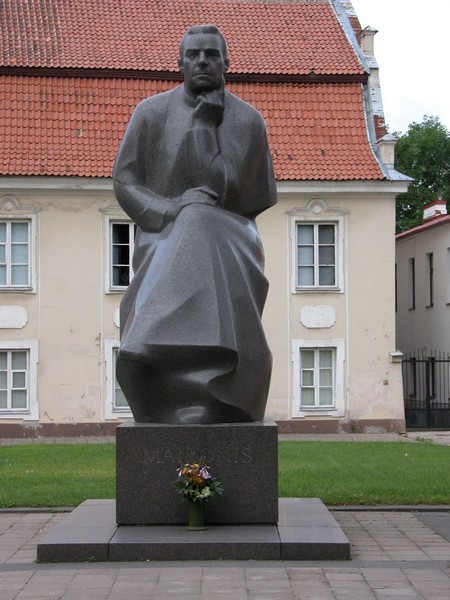 Statue of Lithuanian poet Mironis in Kaunas. Photo by By Benutzer:Brunswyk.

From 1933, the ballet of Jūratė and Kastytis has been staged, and in 1955 an opera and a theatre play were written, with a success that reached even North America with its premiere in Chicago in the seventies. In 2002, the Lithuanian group Skyle staged the Jūratė and Kastytis rock opera, with a soundtrack of eleven songs composed by Rimvydas Stankevičius and Rokas Radzevičius, and with Aistė Smilgevičiūtė in the role of Jūratė and Marijus Mikutavičius in the role of Kastytis. This rock opera was performed in Klaipeda as part of the celebrations for its 750th anniversary, and it is known for taking a modern twist into the classic story. 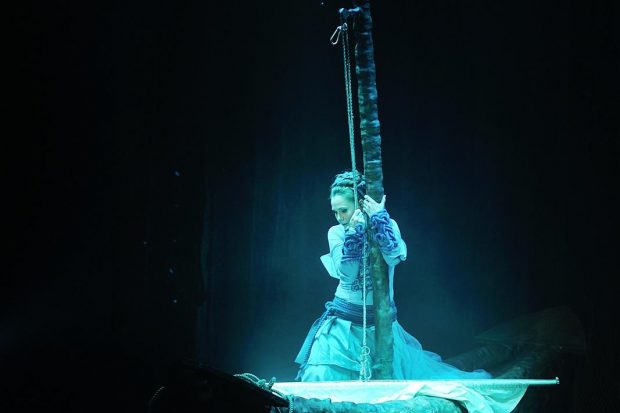 The legend Jūratė and Kastytis has not only aroused artistic performances and ballads, but it is also recognized by monuments and even whole cities. In the Lithuanian city of Palanga, a monument dedicated to Jūratė and Kastytis stands in the touristic centre, and its coat of arms is also linked to the legend. It shows a crown and a collar made of amber pearls, representing the queen of the sea Jūratė and her destroyed amber castle. The amber beads represent, as well, the ancient business of amber processing in the city. Its fame has reached the Lithuanian frontiers, and even in Poland, the popular seaside resort of Jurata has been named after the character of Jūratė, changing it for the polish spelling. 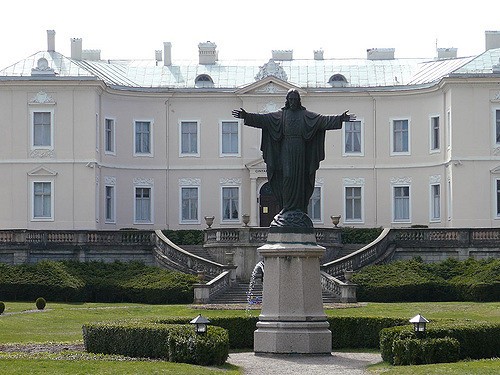 Eager to know more about the Baltics? Join the next Baltic Run and discover with your own eyes the beautiful beaches of the Baltic Sea. If you are lucky enough, maybe you will find a souvenir as unique as an amber tear of a sea goddess…

Liked this story? Are you getting that itch to travel and go on an adventure? Then join us on the next Baltic Run. Find a team of like-minded crazies and we’ll see you at the starting line. If you want to join us in the virtual world then drop us a like on Facebook or follow us on Twitter to keep up with our latest antics.
Tags:
amber amber business Baltic gods Baltic legeds baltic sea Baltic traditions Jurata Jurate Kastytis legend Legend of Jurate and Kastytis Lithuania Lithuanian legends opera Palanga Perkunas story theatre

one response to The Legend of Jūratė and Kastytis