The city in Latvia where famous Communists once sunbathed.

Tucked away in the Gulf of Riga, just west of Latvia’s capital, is a holiday resort with a very unique history. During the Communist era, Jūrmala was regarded as one of the Soviet Union’s top vacation spots. It once attracted the very elite, include Brezhnev and Khrushchev, and it’s still worth a visit today. Here’s what you need to know. For many Soviet politicians, the exclusive Black Sea resorts of Yalta and Sochi were often simply too hot. And so the less extreme climate of Jūrmala was extremely attractive. It was known as the third most exclusive resort for Soviet politicians, not to mention ordinary holidaymakers from the USSR. Tourists from all over the Soviet Union would visit what was known as “Riga-on-Sea”, with its fancy hotels, famous spas, and, of course, gorgeous shoreline.

Jūrmala promised luxury, in a style that seemed incredibly Western. It was far more European than Black Sea alternatives, with the added advantage that Russian was still understood. The beach is long and narrow, lined with forest, which provides a feeling of seclusion. This allowed prominent Soviet politicians — including Brezhnev and Khrushchev — and later, Boris Yeltsin, to stay in private dachas, far from prying eyes.

Russians has discovered the charms of the Latvian Riviera long before the Soviet Union, though. Originally popular among Baltic Germans, in the late 19th century the Jūrmala became the first in the Russian empire to end segregated swimming. In the early 20th century it developed into a charming seaside town and while the Soviet occupation and subsequent nationalization gave it a more socialist vibe, this did nothing to lessen the popularity. 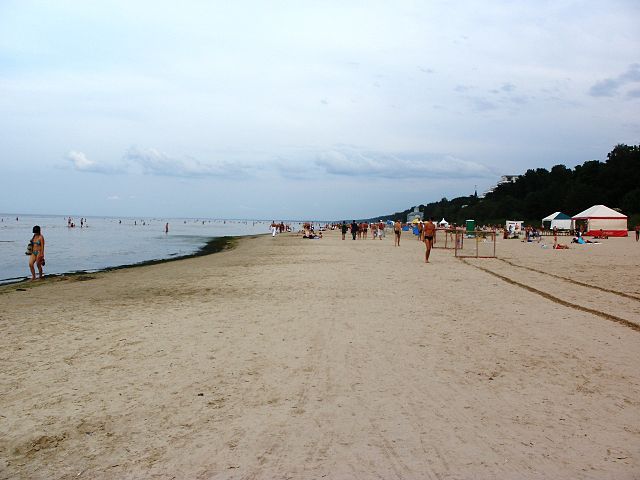 The fall of the Soviet Union was initially devastating for the economy of Jūrmala, with hotels closing and spas firing staff. However, since then there has been a gradual resurgence in popularity. Nowadays tourists from Europe, especially Scandinavia, come to see what all the fuss was all about, while for those from former Soviet states a visit can be a very nostalgic experience.

Liked this story? Are you getting that itch to travel and go on an adventure? Then join us on the next Baltic Run. Find a team of like-minded crazies and we’ll see you at the starting line. If you want to join us in the virtual world then drop us a like on Facebook or follow us on Twitter and Instagram to keep up with our latest antics.
Tags:
Baltic Run baltics history Jurmala Latvia soviet latvia travel scientists