Hidden Gems of Latvia: Skrunda-1, A Soviet Ghost Town Hidden in a Forest 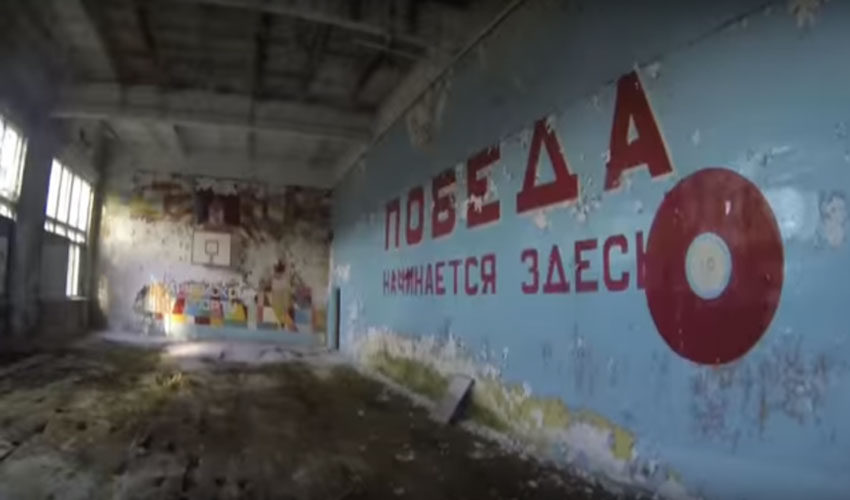 Our Hidden Gems of Latvia series kicks off with this eerie blast from the past that is sure to linger in the memory of all who set foot here: the secret ghost town of Skrunda-1.

Photo by Sarunas A

When was it built?

Purpose-built near the Latvian town of Skrunda, this complex known as ‘Skrunda-1’ was erected in 1963; it served as an early-warning radar system during the Cold War as it monitored the skies round the clock for incoming missiles from the west. Perched right at the westernmost sliver of the Soviet Union, the apparatus represented one of the most important strategic points that fed information back to Moscow. The town grew around the two large radar installations: the settlement was only home to for the scientists, soldiers, and technicians who guarded and maintained the machinery. Here’s a video of what it looks like today:

How large is it?

Skrunda-1 is spread out over an area of a hundred acres and features ten apartment blocks, a theatre, a school and a gymnasium; the community had administrative offices canteens, shops, and even an officers’ club. There were also military barracks on site, boiler houses, a water tower, pumping stations, machine workshops, and even factories. It was a fully functional town: in its heyday, Skrunda-1 was home to more than 5,000 people – but what made this settlement truly unusual was its classified status.

How unique is it?

These days, the Russian government openly acknowledges the existence of forty-four ‘secret cities’ within its borders; while outside experts have speculated there may be a dozen more that remain unmentioned.

During the Soviet era, these secret or closed cities were constructed throughout satellite states as well, typically as bases for nuclear facilities secret research programmes, clandestine military operations, and so on. They’d function like a city-sized military base, with project personnel, soldiers workers, engineers and whole families living within militarised borders. More often than not, these secret settlements were omitted from road signs or maps, and many even went nameless. They would instead be designated by the name of the nearest town, plus a special postcode: for example, there was Chelyabinsk- 65; Arzamas- 16; and in Latvia, a military settlement known only as Skrunda-1.

Can’t have been a very well-kept secret…

Well, no, not exactly. Firstly, local TV and radio stations would find their signals obliterated by the overpowering radar presence of Skrunda-1, so soon enough the Latvians had an inkling of what was happening there; and, of course, Western intelligence agencies weren’t far behind.

After the collapse of the Soviet Union, most of these secret cities were either declassified or abandoned. A few of those within Russia’s borders maintain their status up to this day, but elsewhere, as Russian troops withdrew from the former satellite states, they would leave the empty shells of cities in their wake that had never officially existed.

What does the future hold for it?

When the Soviets were requested to leave Latvia in 1994, a deal was struck that let the remaining Soviets operate the base for four more years, which it did, finally leaving it in 1998, leaving Skrunda-1 to fall into terminal disrepair. In celebration of the Soviets’ leaving, the Latvians demolished one of the radar towers, but the rest of the base was left to be scavenged for scrap and crumble with time.

Today the sixty-odd buildings that remain are mere shadows of their former selves, though bits of the original propaganda-spawn art still clings to some of the walls, like motivational slogans and pictures of Lenin. But before Skrunda-1 crumbles back into the soil, the Latvian government has recently decided to preserve, and possibly refurbish what is left of the site. This would allow them to use the site for a variety of purposes, ranging from tourist uses to military training exercises. And, of course, you could make it the spookiest add-on to your Baltic Run challenge, if you’re so inclined!

Okay…So, since it’s so hard to locate, how can I find it?

Liked this story? Are you getting that itch to travel and go on an adventure? Then join us on the next Baltic Run. Find a team of like-minded crazies and we’ll see you at the starting line. If you want to join us in the virtual world then drop us a like on Facebook> or follow us on Twitter and Instagram> to keep up with our latest antics.
Tags:
baltic Baltic adventure Baltic countries Baltic rally Baltic Run baltics ghost town Latvia Skrunda Skrunda 1 soviet soviet sites the baltics winter rally