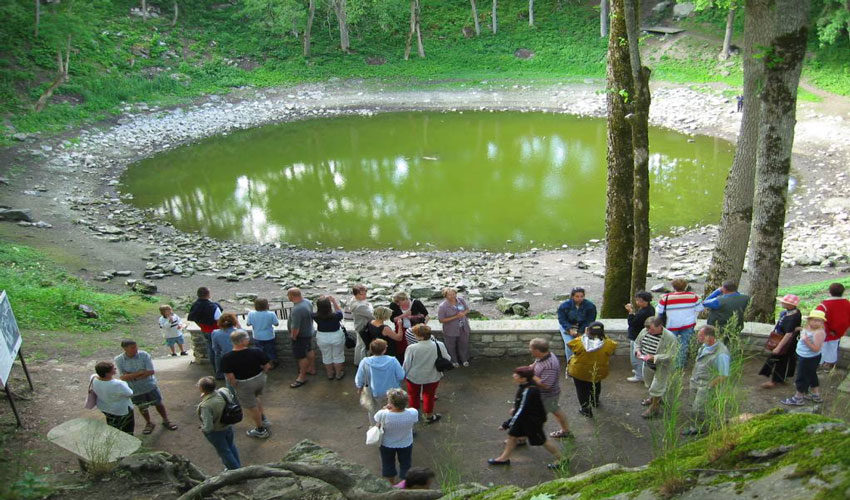 If, while reading last week’s piece on vintage KGB spy tech, you too fleetingly felt that if presented with some of the pegs or dials there out of context, you might not be able to tell their functions from that of a hole in the ground, this one is for you. Because, yes, that is what we’ll be peering at today: a circular indent of extraterrestrial origin known as the Kaali Meteorite Crater Field. Count down to take off; three, two, one.

So what is it?

Kaali, found on the Estonian island of Saaremaa, is the spot of the last massive meteorite impact that occurred in a densely populated area. The landscape that the collision left in its wake has spawned a myriad mythological tales and possibly a mysterious ancient cult.

When did it happen?

About 7,500 years ago, a humungous rock from space was speeding toward the Earth. While still in the air, many kilometers above the Earth’s surface, the meteorite split into pieces from the heat and pressure of the atmosphere. The resulting splinters embedded themselves into Saaremaa with the force of a small nuclear bomb, wreaking havoc on the landscape and very likely claiming numerous victims.

What is there now?

The massive explosion left nine craters in total, which are now referred to as the Kaali Meteorite Crater Field. Some of these holes are quite small: one is only twelve meters across and one meter deep. But the most interesting of the them all is the largest one, a gently sloping bowl filled with water. This is the one that’s known as Kaali crater; it measures 110 meters across, and is said to have been a sacred site for centuries, in part because of its cosmic origin. Even more goosebump-inducingly, Kaali crater is surrounded by the remains of an massive stone wall from the Late Bronze Age. It is by far the strongest structure of its kind in the region, which is a huge clue as to the crater’s use by the peoples of the era.

Well, archaeologists believe that it is possible that the wall might have been a stronghold for a cult settlement. This seems all the more true because there is a fairly large quantity of animal bones within the wall’s borders too. So the Kaali crater lake was not only used for water, but also as a place of sacrifice. Also, while we know that that Estonians made live sacrificial offerings in the past, one strange aspect of the site’s animal remains is that some date back only to the 17th century, long after the Church outlawed such rituals. Intriguingly, because Kaali lake is six metres deep, many believe that that ancient offerings still remain undiscovered at the bottom of it. But deposits of oak trees four metres deep in the water have formed a barrier to them. Whatever the truth may be, Kaali is a site of undisputed importance, both scientifically and historically.

It’s odd that the site isn’t any better known, isn’t it?

It is. Even though it isn’t in the middle of nowhere – there is a Kaali Meteor Museum and Hotel nearby, if you want to stay for another day among ancient ruins and the evidence of harrowing prehistoric celestial destruction.

Inspired to see it on your Baltic Run? Well, you’re in luck, as it’s fairly easily accessible in a number of different ways!

Liked this story? Are you getting that itch to travel and go on an adventure? Then join us on the next Baltic Run. Find a team of like-minded crazies and we’ll see you at the starting line. If you want to join us in the virtual world then drop us a like on Facebook> or follow us on Twitter and Instagram> to keep up with our latest antics.
Tags:
ancient cult animal sacrifice baltic Baltic adventure Baltic countries Baltic Run Baltic States bronze age Estonia Estonian Kaali crater meteorite prehistoric ruin sacred site