The Rose of Turaida – A tragic lovestory The cave of Gutmanis in Latvia between Turaida and Sigulda is a place of ancient worship, where offerings to deities were made, and it is also the scenario of the beautiful and sad story of the Rose of Turaida.

It was the year 1601, when the Swedish army invaded the Turaida Castle during the course of the Polish- Swedish wars. One of the bravest fighters of the Swedish army, known as Greif, was walking around the castle and between the ones killed in battle shortly after the occupation, when he realized there was a little baby among the dead bodies. She was a girl, just a few weeks old. Greif did not have it in him to end her life and decided to adopt her and rise her as his own daughter. As the battle had happened in the month of May, he decided to name the little girl Maija. 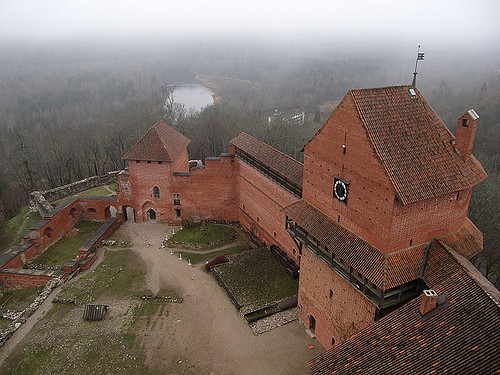 Castle of Turaida. Photo by Martijn.Munneke.

Years went by and little Maija grew up to be a beautiful and admired lady known as the Rose of Turaida. She was promised to a gardener called Victor Hail, who lived at the opposite side of the Gauja River in Sigulda Castle. Both lovers used to meet halfway, in a secret cave- the Gutmanis Cave.

A Polish deserter named Jakubovsky also fell in love with Maija, and asked her to marry him. However, the young lady declined his offer. Furious, Jakubovsky sent a henchman named Skudritis with a fake message to meet Maija: he said to bring a message from Victor changing the time of their evening meeting to an earlier time than usual. When Maija arrived to the cave, where she found the angered Jakubovsky and she realized she had been fooled. Jakubovsky’s plan was to take her by force, but Maija preferred to die before that could happen so she decided to deceive him into killing her. She offered Jakubovsky the red scarf she was wearing, and she told him that it was a magical scarf that protected anyone who wore it from death. She promised she would give it to him if he let her go, and, to prove its magical powers, he could try to kill her with his sword. Jakubovsky hesitated, but in a time and society that believed strongly in superstition and magic, he ended up charging his sword against Maija, and ending the girl’s life.

Once Jakubovsky realized what he had done, he feared the punishment for killing Maija, so he ran off and hanged himself in the woods. Later that night, Victor arrived to the cave to meet with Maija as usual, only to find her murdered. Scared, he run away from the cave to ask for help in the village, but in the rush he lost his axe in the cave. Therefore, he was accused of being the murderer of Maija. Everything seemed lost for Victor during the trial, when an unexpected twist changed the course of events.

Skudritis, Jakubovsky’s henchman, had secretly followed him to the cave, and he had witnessed everything. Maybe hadn’t been aware of Jakubovsky’s intentions or perhaps he felt guilty of the outcome, but he testified in defence of Victor, who was then acquitted.

The story was believed to be a legend for a large amount of time. It was only in the 19th century when documents of court archives were found in Vidzeme, which revealed the details of the murder of Maija in Gutman’s Cave in August of 1620, proving the veracity of the story, which makes it more heartbreaking. 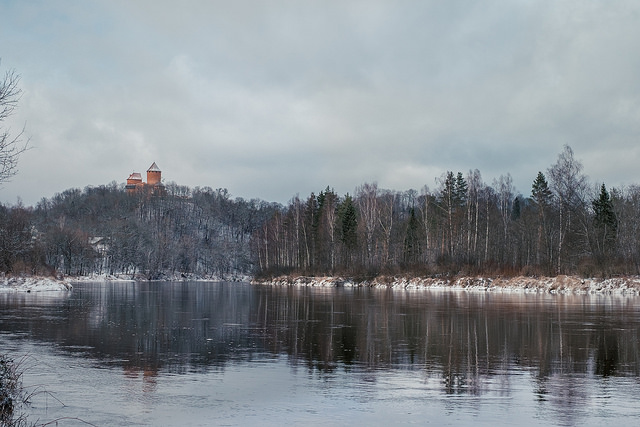 Sigulda across the Gauja river. Photo by Kārlis Dambrāns

The Rose of Turaida was buried in the cemetery by Turaida Church, were the tomb can be visited today. Also the cave of Gutmanis, were the lovers used to meet, can be visited, as well as a smaller cave known as Victor’s cave, which the gardener hacked out for his fiancée to be able to watch him work in the gardens of Sigulda Castle. The love story of Maija and Victor also inspired the nickname of Turaida, which is sometimes referred to as “The City of Love”.

If you want to live happier stories about which bards will sing in the next few centuries, join the Baltic Run and drive between Turaida, Sigulda, and many other fantastic places into the North in a snow filled amazing road trip!

Liked this story? Are you getting that itch to travel and go on an adventure? Then join us on the next Baltic Run. Find a team of like-minded crazies and we’ll see you at the starting line. If you want to join us in the virtual world then drop us a like on Facebook or follow us on Twitter to keep up with our latest antics.
Tags:
Gutmanis Gutmanis Cave Jakubovsky Maija Rose of Turaida Sigulda Swedish Polish Wars Turaida Victor Hail Victor's Cave