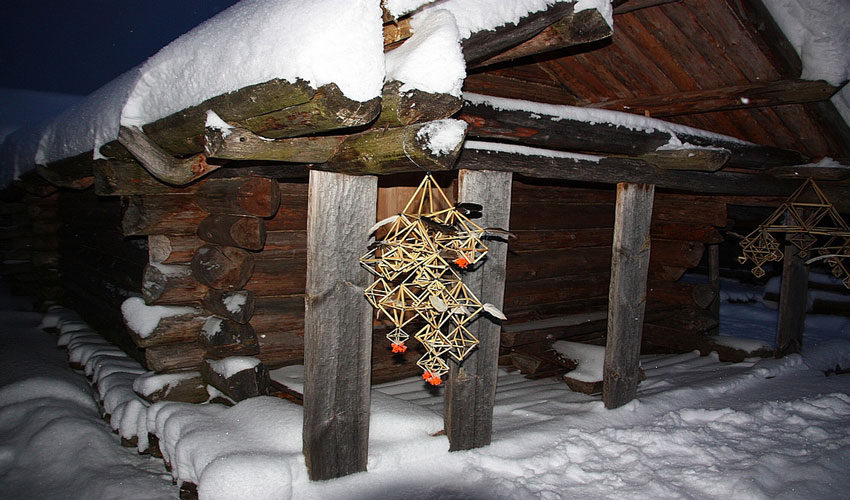 Ever wished you could simply walk way back trough time into another era and lose yourself in the sights and sounds there? If so, Āraiši lake fortress in Latvia is the place for you. This wooden island fortress is the perfect destination to simply stroll back to the 9th Century, because this charming wooden recreation of a ninth century village looks as if it was built yesterday.

Why was it built here?

The fortress sits on an island in Latvia’s Āraiši Lake, because this is the exact spot where one of scores of ancient villages in the area would have stood in the 9th-10th century. It’s as faithful a recreation of it as possible.

So what marks it out from the other villages?

Although many such lake fortresses’ or villages’ remains have been found around a couple of other lakes in Southern-Estonia and Northern-Latvia, the remains of the Āraiši village seem to be the best preserved. This is why researchers decided to rebuild as exact a replica as they could come up with here, on this spot, using new materials.

How did they know what to build?

They studied in minute detail the remains of buildings from the original village that were unearthed during the 60s and 70s, to discern just how the ancient wooden constructions would have looked. When they had a clear enough picture of what to build, they began to piece together the village-fortress in 1993. And this is what it looks like now:

That can’t have been straightforward, what with it being on an island.

Indeed. To reconstruct the village, they first had to bring the water level of the lake down about five feet, and transport large trunks and timbers to the site from which to construct the rustic looking cottages. Although they had found the remains of some 150 wooden buildings here, they recreated only fourteen on the Āraiši Lake Fortress site. When this was complete, they still had the job of building a small, thin footbridge to the mainland.

And the original one?

The original Āraiši lake fortress was built on a low, frequently flooded island in the lake, which was connected to the shore by an 80-metre-long natural bank of glacial till.

Back in the ninth century, the water level in Lake Āraiši was about 1.5–2 m lower than today. The builders of the original castle first created a rectangular foundation framework of logs on the island, which they then covered with a spread of lighter logs. This foundation platform then raised the structure about a meter above the water, which was sufficient to protect it from fluctuations of the water level, and also ensuring that even if it did get flooded, the water would be able to drain away.

The houses and outbuildings of the fortress were built close together in rows along the perimeter of the platform, with an extra row running along the middle. The complex was then surrounded with fortifications, and a pathway was built on the stony bank to connect the settlement with the shore.

I see. Sounds like my kind of thing! Is it open all year?

It is. You’ll find the fortress-village on the Āraiši Museum Park site, which also contains the remains of a stone castle nearby, and some recreated stone dwellings too.

Liked this story? Are you getting that itch to travel and go on an adventure? Then join us on the next Baltic Run. Find a team of like-minded crazies and we’ll see you at the starting line. If you want to join us in the virtual world then drop us a like on Facebook> or follow us on Twitter and Instagram> to keep up with our latest antics.
Tags:
Āraiši Lake Fortress Āraiši Museum Park Baltic adventure Baltic countries Baltic rally Baltic Run Baltic States hidden gems of latvia island fortress Latvia medieval fortress medieval village the baltics winter rally