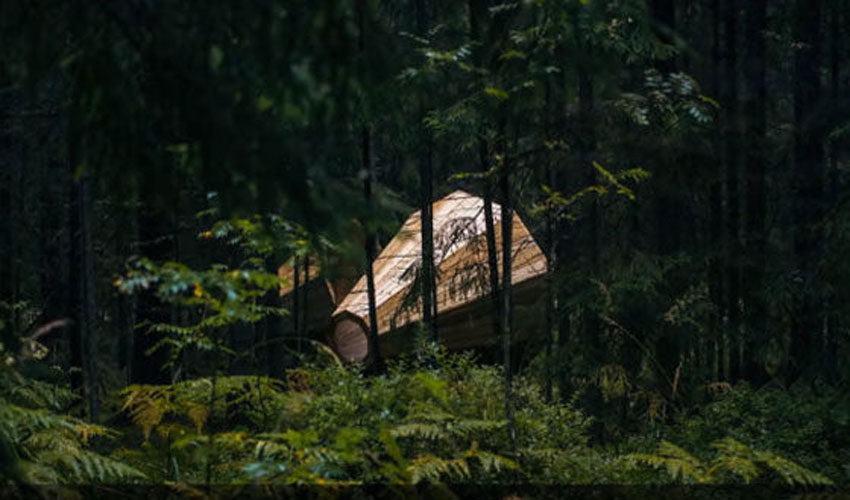 Yes. Megaphones. Three enormous ones, to turn up the sound of nature’s volume, a.k.a. the not – nothing you don’t hear anymore, because urban living. As if possessed by the spirit of all things green and leafy, intent on granting humanity a second chance at mending The Rift, a throng of Estonian interior architecture students, led by Birgit Öigus, took a backwards leap faith of some 400 years, and assembled these conical contraptions, these virtual wormholes into the pre-industrialized world, so that you may also come full circle here to meet a long-lost sense of yours. You can thank them later.

So where exactly are they?

Estonia’s Võru county forest , miles from anywhere, in the middle of a clearing. Because  the region is well-known for its natural beauty, they decided to plant these portals to auditory epiphany of theirs right here, where they would enhance the sounds of birds singing and leaves fluttering in the breeze to maximum effect.  The project was named RUUP. Due to their remoteness from anything man-made, the cones have nothing to channel but the natural sounds emanating from the flora and fauna of the forest.

That sounds great. How sturdy are these cones?

Strong enough to bear up under the weight of several adults. Actually, when the project was finally completed, a gaggle of musicians came and played music while seated right inside the funnels. No further info is available on this deliberately decibelous act, but that it hasn’t been repeated since. Which reminds me: if you happen to be traveling with small, contrary, tantrum-prone children, and feel you’ve had an unduly easy run lately, come. You’ll be telling your grandchildren all about it each and every Christmas, as long as you live.

Okay, got it. Is there anything else I should know about the Pahni megaphones?

As you would expect from interior design students, they placed each of the three amplifiers at an equal distance from the other two on an imaginary circle, all pointing to the centre. So if you stood in the intersection of the three streams of channeled sound, you would get a top class 3D sound experience. However, in reality the effect is much more akin to being plunged headfirst into an exhilaratingly overwhelming bath of nature sounds.

Hmm. How can I get there?

Well, if you have your heart set on going, you’ll need heaps of personal grit to match that of the Estonian municipal kind, especially if you aim to go in winter, because Pahni is found in the region of Vorumaa, whose capital, Voru (Võru), is approximately 27 km / 17 mi from Pahni (as the crow flies), and the distance from Pahni to Tallinn is about 234 km / 145 mi (again, as the crow flies). Yes. But then again, I’m sure you wouldn’t be here with us on the Baltic Run blog reading this if you weren’t made of the kind of stuff that compels roaring giants of some kind to recoil into silence.

Liked this story? Are you getting that itch to travel and go on an adventure? Then join us on the next Baltic Run. Find a team of like-minded crazies and we’ll see you at the starting line. If you want to join us in the virtual world then drop us a like on Facebook> or follow us on Twitter and Instagram> to keep up with our latest antics.
Tags:
art project estonia Baltic Run Estonia hidden gems in estonia Megaphones nature in the baltics nature sounds Pähni Pähni Megaphones sounds of nature the baltics